Cyber Crime And Rules On Internet Be Safe 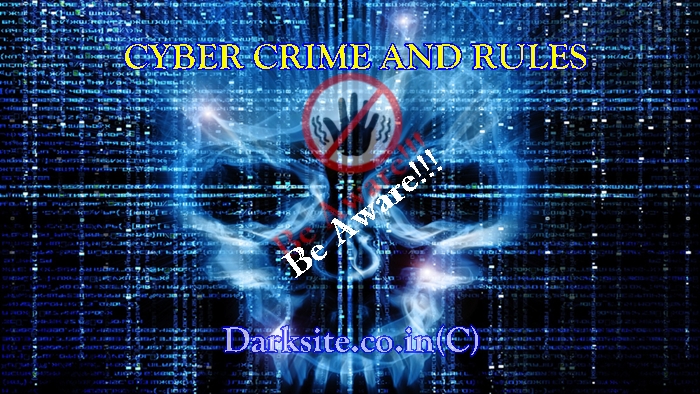 Cyber Crime And Rules That You Should Know

As The Days Progresses use of computers and the internet has increased rapidly among people.with the gaining popularity of internet or world wide web there also growth in crime specific to cyber world.people are getting smart enough to steal some one credential and perform various action on that may be consider bank account transaction or hacking into social network.
Everyone who uses the internet is a potential victim. In the enforcement of these criminal offenses, it is imperative to incarcerate the small percentage who are criminal users and to protect the majority of users who are innocent. There is a broad spectrum of computer and internet crimes and they are often covered by both state and federal laws.

The direct victim of a computer crime can either be the computer, or network, itself. These crimes can victimize something independent of the network such as a consumer by simply using a computer during the crime.

Crimes that target computers specifically include things such as the implementation of computer viruses. Another type of this crime is sometimes referred to as a denial-of-service attack which is aimed at bringing down a particular network. The introduction of malware to a network is also a direct attack on a computer. Examples of malware are trojan horses and spyware. These are forms of unwanted software which infect a computer and are also referred to as a computer contaminant.
Cyber terrorism is a form of this type of crime in which the perpetrator attempts to bring down a large scale computer network to interrupt its users and create panic.

Examples of computer crimes with independent victims are cyberstalking, identity theft, and phishing.

With such a variety of offenses related to the cyber world, many worry that they will be subject to prosecution if they wander into an inappropriate website or inadvertently spread malware. The truth of the matter is that in the majority of state and federal statutes regulating computer crimes, the laws are written specifically to target those who indicate that they "knowingly" and/or "willingly" perpetrated one of these offenses.

The agents who investigate these crimes, along with the prosecutor, carry the burden of showing that a person had the intent to commit the computer crime. A knowledgeable criminal lawyer can provide the expertise to defend those who may find themselves prosecuted for something that they did not have the intent to commit.

So Lets Make the Cyber world Crime Free and Better for ease of Use For Benefit.
Posted by Chandrakant Nial
Labels: Anti Hacking, For Students, Google Learning, Learning