How To Install VMware Tools in BackTrack

A+ A-
Print Email
Hello friends many People ask me that they are facing problem in installing VMware tools After installation of backtrack well its a very simple procedure to do that all you have to do is type some commands in VMware console Properly in the sequence order which i will explain you here .

As we all know there exist two version of backtrack Gnome And KDE.

Note :In GNOME VMware image of BackTrack has VMware Tools installed by default So No need to experiment on it.

My way On installation is quite simpler although you can follow tradition way to install it Which i will be discussing later.
The Steps Are:
Go to Installed Backtrack On VMware On the Top of menu bar Virtual Machine -> Install VMware Tools.

Now After that follow this simple commands as discussed In screen shot See that and follow it keep things simple and clear. 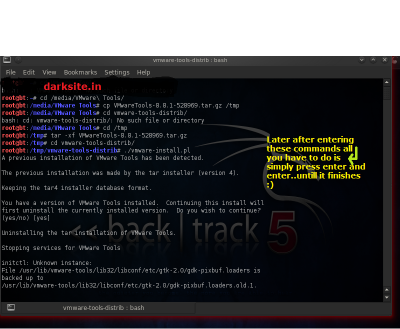 
After this a series of questions It will be done .

Here you need to manually install the VMware Tools you first have to prepare your kernel source by issuing the following commands:

WHEN ASKED IF YOU WANT THE SCRIPT TO RUN VMWARE-CONFIG-TOOLS.PL FOR YOU, SAY NO!
Tada Don't forget to restart your OS After Installation thats a good for the OS.
I am sure this tutorial would help you in installing VMware Tool.

Enjoy, If you face any problem then do comment share it thank you :)
Posted by Chandrakant
Labels: Backtrack Tutorials, Learning, Tools