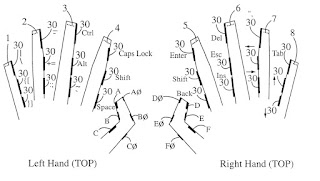 The above shown is just the Skeleton of the next generation keyboard that is used to type on the screen simply by hand moments .

The video clip shown below describe the over all feature and usability of the keyboard in detail.

it is also known as (3rd)Third generation keyboard
KITTY(Keyboard-Independent Touch-Typing).

It is very much comfortable for game-based touch-typing tutors allowing beginners to learn touch-typing without being confined to a desk.
KITTY Reduces the function ability of user being carrying a separate keyboard along with system. In near future every where these glove keyboard will user friendly.